For more about botany in the Buckeye State, visit  ohioplants.org, the companion to Ohio Plants, EEOB 2210.

The geology of Ohio in broad strokes can be divided into two parts. The first, found in ¾ corners of the state, is the glaciated area. The triangle formed when connecting Toledo, Cleveland, and Cincinnati, (how I prefer to visualize this zone), was once home to massive glaciers that left behind some interesting geology. Its underlying stone is primarily limestone, a sign of the ancient coral reefs found even before the most recent Ice Age. This stone, as described by Jane Forsyth, put up very little resistance against the dynamic glaciers, hence the flat landscape we see today.
What marks the end of this zone you ask? Well, if the glaciers cut through limestone like butter, it must have taken a tougher stone to stop them. Enter Sandstone. The southeastern corner of Ohio, known for its rolling hills and wide reaching forests, is also known as the unglaciated region. While shale and limestone may have submitted to the leveling of Ohio, sandstone, in and atop the many hills of the south east corner, did not yield. The result of this divide can be seen in the remnants of glacial till, effectively the sediment left behind from the behemoth glaciers that once covered the state, which typically reflects the materials the glaciers moved over. In the glaciated region, the till is rich in lime and clay, while these materials are found in much smaller numbers in the unglaciated region, save for the transitional zones between limestone bedrock and sandstone hill tops.
The “original” sequence of rock strata in Ohio was limestone, overlain by shale, overlain by sandstone. This arch extended ‘north-south over Western Ohio’ at its crest, and sandstone was found east of the crest. Its erosion leading up to the Ice Age is to blame for the difference in geology that ultimately led to the flattening of 75% of the state. The erosion was mostly done by the Teays River, which flowed for about 200 million years and only ceased due to the advance of Ice Age glaciers. This ancient river cut deepest at the arch crest again due to the resistance of the sandstone at the low points to the east, and the effect was exacerbated by the glaciers that followed.
The glacial boundary was formed due to the presence of more resistance rock in the south east corner of Ohio. The sandstone resisted glacial advance while the limestone areas of Ohio were ultimately flattened.

This boundary ultimately reflects the different substrates found across Ohio, a particularly important factor in determining which plants can be found and where. In the western and northeast corners of Ohio and just about everywhere in between, the substrate consists of lime and clay and is generally poorly draining. The poor drainage often leads to standing water and low oxygen environments, with a high amount of nutrients (the accessibility of these nutrients is another story). The lime components mean the pH of the overall soil trends high, and the poor drainage also causes poor aeration. In the southeastern corner though, the substrate is permeable, aerated, acidic, and poor in nutrients. 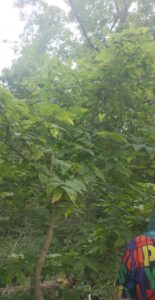 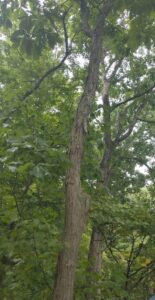 A Review of Limiting Factors

Sweet Buckeyes
This tree’s distribution is limited to the unglaciated region, and is assumed to remain on high clay high lime substrates, though it isn’t 100% known.
Hemlock
This tree is found in a similar environment to Sweet Buckeye, though is more associated with cool, moist valleys found between the sandstone hills of the southeast corner. These valleys are also more limiting than pH of the soil, as lower magnitude valleys north of the glacial boundary are also home to hemlock trees.
Rhododendron
This tree is evidently limited by the preglacial Teays River, as the glacial advance blocked the rivers drainage, the valleys these trees associated with were destroyed, leaving behind trees like this species. An overlay of the original river and the distribution of this tree shows this limitation best.

Personally I cannot say I do come here often. Here being of course Cedar Bog. Cedar Fen? Cedar Fen-Bog? This site, known as Cedar Bog Nature Preserve for…reasons… is perhaps best described by its status as the highest rank on the Ohio Floristic Diversity Index. This translates to great plant diversity, many of which being endangered/ threatened, in some of the highest concentrations in the state. It has a true fen, flushing through small streams and producing alkaline conditions (dissolved limestone from all the aforementioned glaciation geology) to grow sedge meadows and swamp forests all contained in one Nature Preserve.

My assignment was to find 2 examples of plant insect interactions. The first of which was a definitive gall on a species of boneset (Left). Boneset can be recognized by its tall stature in branching clusters, opposite toothed leaves which cup the stem at their lowest, and white, indistinguishable flowers. A gall is simply a plant’s hormonal defensive mechanism against insect attacks. They are commonly a sign of symbiosis, as many species of wasps use galls to lay their eggs within, giving their larvae ample plant tissue to feast on once they emerge. While the culprit behind this gall could not be identified, there is one insect at Battelle Darby Metropark that will be less represented in its next generation, as we cut the gall open to investigate. 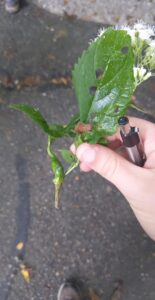 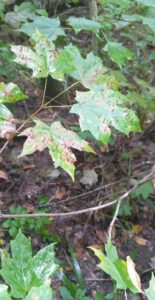 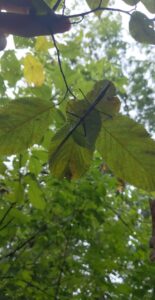 My second example is more of a twofer (Right). One interesting phenomena I noticed was some erect spikes coming off of a Sugar Maple’s leaves. My first thought was gall, though these spikes were seemingly much thinner than the first true gall. The closest I could find was Maple Bladder Gall Mites, though their galls do not match those pictured. To remedy this confusion, I have also included a photo of the mating stick bugs sighted on another tree. Using a plant for breeding is interaction after all.

Below are photos of our highest cc value plants found at Cedar Bog.

Swamp Birch
With a cc value of 10, this plant is found almost exclusively at this site, likely due to the underlying geology and hydrology present. 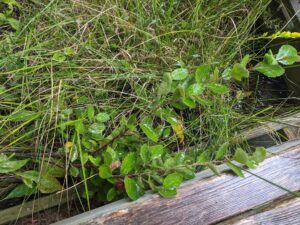 Grass-of-Parnassus
Another cc value of 10, we were lucky enough to witness these not grasses flowering along the boardwalk. They were certainly some of the prettiest plants we saw on this excursion in my opinion 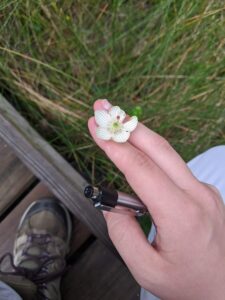 One of many orchids in existence, this showy flower wasn’t showing off for us. It has a cc of 10, so I guess we’ll just have to return to the Bog-Fen when it does as we are unlikely to find it elsewhere. 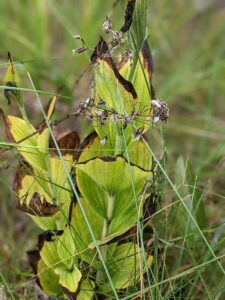 Ohio Goldenrod
While many goldenrods can be found in Ohio, this one earned the honor of being THE Ohio Goldenrod. Its cc value of 9 means it is only slightly less picky in its distribution compared to the Swamp Birch and Grass-of-Parnassus, though I wouldn’t count on seeing it in vastly different areas anytime soon. (No photos but the THE joke was too fun to leave out) 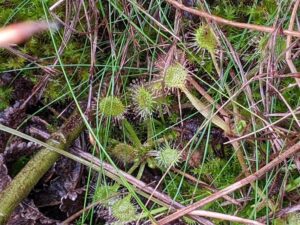